1314 The Battle of Bannockburn 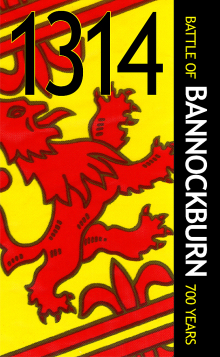 Edward I of England invaded Scotland in 1296, slaughtering the townsfolk of Berwick, crushing resistance at the Battle of Dunbar and then Falkirk, and then brutally executing the Scottish patriot Sir William Wallace.

This could have been the end of Scotland as an independent nation, but Robert the Bruce delcared himself King of Scots and soon began to drive the invaders out of the country.

The strong and strategic castle of Stirling remained in English hands. To relieve the siege, the English sent a mighty army of knights, archers and infantry into Scotland, far superior to any force that Robert the Bruce could muster.

This book covers the run-up to this pivotal event, the crucial parts played by Sir William Wallace and Robert the Bruce, and what happened after the battle.

Bannockburn was Scotland’s greatest military victory and remains a truly momentous event, even some 700 years after the battle.

With maps, battle plans and photos, this wee book covers all the events in an accessible and easily digested format, and includes many places to visit with opening and contact details.

A Kingdom in Crisis

Robert the Bruce: A King in Waiting

Robert I, King of Scots

All Roads Lead to Bannockburn

The Battle of Bannockburn

At Last, a King Triumphant?

‘Our Most Tireless Prince, King and Lord, the Lord Robert’

What Happened After: the Legacy of Bannockburn

Printed by Bell and Bain in Glasgow, Scotland