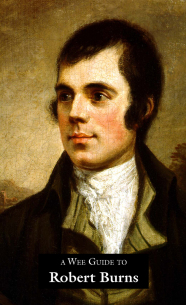 ‘– and so, farewell to rakery’

Rob’s adult life entered a third phase. Six miles north of the market town of Dumfries lies Ellisland. In 1788 there wasn’t even a farmhouse there. Rob built the existing house himself, with £300 supplied by his landlord Patrick Miller of Dalswinton, living meanwhile in a damp hut on the land.

The young married man was alone, too, for Jean remained behind in Ayrshire with her son Robert – this small Rob being the only survivor of the first set of twins, the little girl Jean having died. He missed his wife and child, and when time allowed he would make the journey to see them in Mauchline on horseback – Jean would walk part of the way to meet him, and ride behind him when they met up.

The foundation stone of Ellisland was laid according to proper masonic rites. It was built as a family home and a working farmhouse where hams would be smoked and cheese made, but there was also a room with a desk

and a chair where he could write – and the Ellisland years were remarkably productive. Over 130 poems and songs, including ‘Tam O’ Shanter’, were written here as well as some 230 letters to his widening circle of correspondents.

In addition to building a home for his family, the land required intensive labour. When Rob took up the tenancy it still had the ‘corrugated’ appearance of the old runrig system of agriculture, the land being divided into narrow strips raised in the middle to allow drainage. He applied himself to the widening of these rigs so they would drain more efficiently and the quality of the soil could be improved with lime. But the soil was poor as well as stony, and Burns saw what financial resources he had seep away into it – he was already short of money, having saved his brother Gilbert from bankruptcy.

Finally, the Excise post came through, and Rob embarked upon an entirely new career as a ‘gauger’ or measurer, an officer of His Majesty’s Excise. His name was entered on the Excise list with the annotation: ‘Never tryed; a Poet’. In order to have time for this, he changed Ellisland from an arable to a dairy farm, so that Jean could supervise the milking and the cheese-making. Burns is generally credited with the introduction of the Ayrshire dairy cow to the Dumfries area.

In the days before income tax, Excise was a tax levied on home-produced goods, similar to today’s VAT. It was levied on essentials, such as salt, soap, candles and paper, as well as on luxuries such as whisky and tobacco – on both accounts, a most unpopular tax.

The Exciseman travelled his patch, checking on the makers and merchants of these taxable goods and literally measuring the amount of tax to be paid. An element of surprise was often necessary in these visits.

His territory covered ten parishes in Dumfriesshire and he often rode 200 miles a week, attending all the county fairs and gatherings. Good relations with the local magistrates, through Freemasonry, undoubtedly helped him in the discharge of his duties. At the end of a probationary period that same supervisor who wondered how a poet would cope with the job wrote: ‘Turns out well’.

The disadvantage of this demanding work was, however, the tax it levied on Burns’ own health and time. Although this proved to be one of the most fertile and creative periods of his writing life – ‘Tam o’ Shanter’ is said to have been written in a single day – a hard day in the saddle, in all weathers, with reports to write in the evening, left him with little energy. Physically he was already in terminal decline, and he stumbled into sloughs of black depression and anxiety, obsessed with a fear of poverty and thoughts of death.

Despite Burns’ rage at Jean and his rejection of her before their marriage, he had been unable to abandon her entirely, and their married life was considerably happier than their courtship. Jean, for her part, seems content to have been Mrs Burns, and took over the practical management of Ellisland during the long hours Rob was away.

It is known that Jean had a fine singing voice – the ‘finest wood-note wild’ – a quality Burns always found attractive in women, and 14 of Burns’ poems are supposed to be about her. A letter in 1788 provides an interesting insight into the foundation of their relationship which rings true: the marriage was, wrote Burns, ‘not in consequence of the attachment of romance perhaps; but I had a long and much-loved fellow creature’s happiness or misery in my determination, and I durst not trifle with so important a deposit. Nor have I any cause to repent it ... I have got the handsomest figure, the sweetest temper ... and kindest heart in the county.’ In song he wrote:

It may escape the courtly sparks

It may escape the learned clerks;

But weel the watching lover marks

The kind love that’s in her e’e.

And, of course, to Burns’ satisfaction: ‘Mrs Burns believes, as firmly as her creed, that I am le plus bel esprit...’

We should remember too that Burns lived long before the Victorian era banished sex to a silent underworld: this was a more candid age. He wrote both poetry and prose expressing his enjoyment of physical love, which he called ‘the Tree of Life between Man and Woman’ – though his language was not always so high-minded. ‘Oh, what a peacemaker is a guid weel-willy pintle!’ he wrote at a turbulent time in his relationship with Jean Armour. One of many delightfully bawdy songs is ‘Come Rede me Dame’:

My dame come tell me truly

Will sair a woman duly?

The carlin clew her wanton tail

I learn’d a song in Annandale,

Nine inch will please a lady.

A pet project while at Ellisland was the founding, with his friend and neighbour Robert Riddell, of the first circulating library known to the area. It was open to all upon payment of a five-shilling membership fee – sixpence thereafter at monthly meetings – and the proceeds went towards the purchase of books which could be borrowed on a first-come, first-served basis. Burns managed this venture with conspicuous commitment.

Visitors to Ellisland remarked upon Burns’ apparent ease in his domestic circle and his farming role. His affection towards Jean was noted, as were the pet sheep, the extravagance of feeding potatoes to the cows and the fact that the servants ate every bit as well as the family – and that was well. Jean wore kid gloves to church and Burns was as contradictory as ever when, calling himself a farmer and an Exciseman, he nonetheless inscribed ‘Robert Burns Poet’ on the collar of his dog.

But the spongy ground of Ellisland never repaid the care and the outlay lavished upon it, and Rob did not have the capital to keep pouring into its boggy soil. He was never a bad farmer, but he was a singularly unlucky one.

There were, as ever, money worries. Whatever he could earn or save had been soaked up by his farming disasters and by his responsibilities. His family grew with the birth of Francis in 1789 and William in 1791, while Anna Park, barmaid at the Globe Inn in Dumfries, would add another infant to his brood of babies born outside his marriage. Jean Armour took Anna Park’s child into her own home to care for with the apparently nonchalant remark that ‘Our Robbie should have had twa wives.’

In February 1791, he fell with his horse and broke his arm. In the summer, clumsy as ever, he injured his leg in another accident. In November, he finally gave up on Ellisland  – ‘a ruinous business’ – and the farmer’s life and moved into Dumfries.

The loss of Ellisland was a bitter blow for Rob – and unusually strained relations with Jean for a while, who blamed him for it. He moved his family to a house that is now 11 Bank Street, Dumfries, their possessions loaded on carts, with Jean’s pet heifer trotting behind.

One anecdote indicates more than anything the bitterness he felt. At Ellisland he had freely indulged his passion for scribbling verse on the window panes. Remembering this upon arrival in Dumfries, he despatched his brother-in-law to return and smash every window so inscribed. He would not leave his verse behind in a place that had so broken his heart.