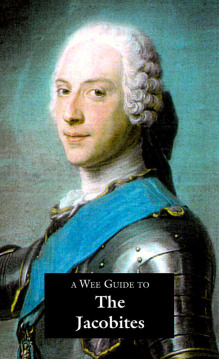 The Jacobites tried to restore the royal dynasty of Stewart to the throne of England and Scotland after James VII had been deposed.

Now in its fourth printing, this engaging wee title spans these stirring times of national and religious strife, covering the desperate attempts to reinstate the Stewarts.

This includes the pitiless campaign of Graham of Claverhouse (Bonnie Dundee to some, Bloody Clavers to others), the shambolic 1715 Rising, and the infamous ‘45. This last rebellion was led by Bonnie Prince Charlie, the mnost controversial character from the Risings, and ended in disaster with the slaughter of the Jacobites at the Battle of Culloden, followed by severe retribution against Jacobite clans.

There are many portraits, illustrations and maps, plus details of more than 50 great Jacobite sites to visit.

The Massacre of Glencoe and the Darien Scheme

The Battle of Culloden 1746

The End of the Jacobites