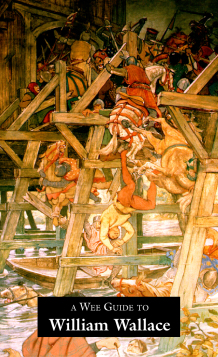 William Wallace is Scotland’s greatest hero, a man larger than life, who came to embody the fight for the survival of the ancoient kingdom of Scots.

When Edward I of England sought to conquer Scotland initially he was successful and country was at his mercy. But William Wallace ‘lifted up his head’ and led a Scottish army to a crushing victory over the mioghty Engligh. And although Wallace was soon defeated and ultimately betrayed, he lit the torch of Scottish independence.

Now in its eight printing, and with many maps, battle plans and photos, this concise wee book fully covers Wallace’s life and stirring times in the turbulent age of the Wars of Independence, and provides information on more than 30 great places to visit associated with Wallace.

A Kingdom in Crisis

The Battle of Stirling Bridge

The Battle of Falkirk

The Hammer of the Scots

The Legacy of William Wallace