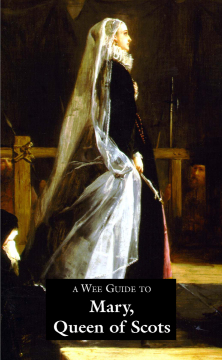 With the signing of the Treaty of Haddington, Mary was placed in even greater danger of being taken prisoner by the English, and at King Henri’s suggestion, plans were made to send her to France. By July 1548, Mary was at Dumbarton Castle, and the French fleet sailed round the north coast of Scotland, came up the Clyde estuary and picked Mary up from Dumbarton. Several others embarked with Mary. The Lords Erskine and Livingston were sent as her guardians, Jean Sinclair as her nurse, and Lady Fleming as her governess.

As companions she had three of her half brothers, illegitimate sons of James V, as well as other sons and daughters of the Scottish nobility, including in particular the four Marys – Fleming, Livingston, Seton and Beaton. Mary Fleming was related to the Royal House of Stewart through her mother. Mary Beaton was of the family of the murdered Cardinal Beaton. Mary Seton’s father was Lord Seton, who was to remain loyal to Mary throughout her life, and Mary Livingston was the daughter of Lord Livingston. Because of their noble birth they were acceptable as ladies-in-waiting for the Queen. The fleet set sail on the 7 August 1548 and arrived near Roscoff (Brittany) on the coast of France six days later.
The next 13 years may have been the happiest and most carefree for Mary. Under the protection of her French grandparents Claud and Antoinette, Duke and Duchess of Guise, her half-brother François Duke of Longueville from her mother’s first marriage, and many other uncles and aunts of the powerful Guise-Lorraine family she could, perhaps for the first time, freely enjoy the splendour and pleasures of courtly life.
The Guise court may not have been royal, but to all intents and purposes the power and influence emanating from this extended dynasty was in many ways equal to Henri’s. It was here that Mary started her proper education; having been brought up speaking Scots she now had to learn French, and eventually mastered Latin, Italian, Spanish and Greek. She actively participated in music and dancing – playing the lute and writing poetry, something she was to continue doing throughout her adult life. Mary also became an accomplished horsewoman and enjoyed riding and hunting.  As her French relatives were Catholic, there was no doubt that Mary would be brought up in the Catholic faith. Although she remained a Catholic until her death, it would add to her problems when she returned to Scotland in 1561, as by then this form of worship had been forbidden by the Scottish parliament.
At this time, an early return to Scotland was not included in the plans of Mary’s Guise relatives or indeed Henri himself. Although Mary was the crowned monarch of Scotland, it was the role of queen of France for which she was now being groomed. It was at the Castle of Carrièries (Chateau de Carrièries) near St Germain that Mary met her betrothed for the first time. Despite his physical failings – he was unhealthy and fragile – Mary and François liked each other.
Henri was also pleased with his future daughter-in-law and welcomed her into the royal court, where she spent much time with other young royals. Henri gradually reduced the influence of Mary’s Scottish advisors and friends by separating her from them more and more. The French royal court, like others of the time, was peripatetic and moved from one castle to another enjoying the culture of the court and the produce of the land. The future looked bright for Mary and François, and although she corresponded frequently with her beloved mother, the problems Mary of Guise faced as Regent of Scotland did not hold much interest for a young girl. Training in political skills was not part of Mary’s education at this time, but in later years she would find that diplomacy would be an important feature of royal rule and administration.
During the years that Mary spent in France, the war between England and Scotland continued, and despite the French presence final defeat of the English proved to be an elusive goal. It was not until troubles in England forced the Duke of Somerset, known as Protector Somerset, to return home, followed by the rest of the English troops chased out by a combination of the arrival of further French troops, famine and disease, that peace was agreed. Peace between France and England was negotiated at the Treaty of Boulogne in March 1550, and finally peace between Scotland and England in June 1551.

Following the removal of English troops from Scotland, Mary of Guise had then to be careful that the presence of large numbers of French did not alienate the Scottish nobles. Many of the French were sent home, but those that remained held important positions in the queen mother’s household. After the signing of the treaty at Boulogne, Mary of Guise visited France in order to request more French support to suppress the progress of the Reformation in Scotland and to support her claim to replace Arran as regent.
James Hamilton, second Earl of Arran, was head of one of the most powerful families in Scotland, and although by inclination Protestant, his loyalty wavered. His agenda was at times pro-English or pro-Protestant, occasionally the two coinciding, but mainly it was to ensure the advancement of the Hamilton power base and to strengthen the family’s claim to the throne. Arran, along with Matthew Stewart, Earl of Lennox, could claim a direct line back to James II.
James II’s younger daughter Mary’s second marriage was to John, Lord Hamilton, and produced James, first Earl of Arran and Elizabeth who married Matthew Stewart, Earl of Lennox. There was an ongoing dispute between the two branches which would climax when a later Lennox, Lord Darnley was introduced to Mary, but at this time it was Arran who was regarded as Mary’s heir presumptive. Arran was opposed to the treaty made at Haddington, as he had hoped that his own son might be a suitable husband for Mary. Although his dreams of a Hamilton-Stewart marriage appeared to be no longer obtainable, Arran was still Regent. In 1551 he was offered the dukedom of Châtelherault in France, along with an annual pension, which he accepted. In addition his son was to command the Scottish Guard in France; all this was in return for giving up the regency in Mary of Guise’s favour.
Châtelherault’s decision was not absolutely guaranteed as he might still have asked for assistance from the Protestant King Edward VI of England, but on Edward’s death in July 1553, England was ruled by the Catholic Queen Mary which reduced the threat of renewed campaigns from south of the border. Arran accepted the bribe, but although his term of office was officially not due to end until Mary was 12 years old, he was however ‘persuaded’ to resign his post by April 1554. The Hamilton family by no means suffered as a result of this loss of position: his brother was then Archbishop of St Andrews, Châtelherault’s son John was Commendator of Arbroath Abbey and Claud was Commendator of Paisley Abbey. Commendators were originally clerics who administered and also acquired the revenues of religious benefices; by the sixteenth century, the posts were sometimes given to laymen who could enjoy the financial rewards without carrying out religious duties. Both financially and politically, the Hamiltons were to continue to play an important role in the future of Scotland.
As Regent, Mary of Guise attempted to carry out pro-French policies and co-operate with her native land in continuing the war against England. Several of her key administrative posts were given to Frenchmen – De Roubay was vice-chancellor and Villemore was comptroller, who shared financial administration with the treasurer. The French also maintained garrison posts at forts at Broughty, Dunbar and Inchkeith. Scottish finances were in deficit after Châtelherault’s administration and Mary of Guise had some problems balancing the books. She gave her personal pension from France to her daughter in order to finance her expenses at the French court, so the Regent had to resort to an appeal to Rome for financial aid, as well as imposing several taxes on the Scottish people in order to meet the cost of warfare.
During this time, the religious question continued to be an important issue but both Mary of Guise and Archbishop Hamilton were more ‘tolerant’ than Beaton had been and Protestant preachers were not prosecuted or imprisoned. Mary needed the support of those nobles who expressed pro-Protestant, and possibly pro-English, tendencies in order to ensure that her daughter’s marriage to the Dauphin would take place. At the same time as negotiations for the marriage were going on in 1557, several Protestant nobles signed a bond declaring their intention to overthrow the Catholic church. This First Bond, was signed in December 1557 by the Earls of Glencairn, Argyll, and Morton; Lord Lorne, son of Argyll; and John Erskine of Dun – but it did not attract as much support as was hoped and it would be another two years before the Protestant lords would take a more effective stance.
Meanwhile, Mary and François’s wedding negotiations continued apace. Between December 1557 and April 1558 the French and Scots discussed the marriage settlement, and among the Scots commissioners sent to France by Mary of Guise were Lord James Stewart, Mary’s half-brother, Erskine of Dun and Cassillis, two of whom had signed the First Bond. Because of his own problems with Spain Henri II was eager to hasten the final uniting of the two countries, but the Scots were still reluctant to acquiesce to all of France’s proposals. The Scots wanted assurance of their country’s liberties and laws,

and were reluctant to acknowledge what might be perceived as France’s suzerainty over Scotland: the authority of one sovereign over another sovereign, and thereby one state over another autonomous state  – thereby recalling fears of similar attempts at domination by England. As well as national worries, the Hamiltons also wanted to ensure their right of inheritance to the Scottish crown if Mary were to have no children.
The French appeared to agree to these conditions. There was however another set of documents signed in secret three weeks before the wedding, which stated that the Scottish crown would pass to the French if Mary were childless, and that the kingdom of Scotland was to be put up as surety against the cost of her own personal expenses in France, and for any expenses which might be incurred by France in defending Scotland. The fact that four of the commissioners died before they returned to Scotland – and it would appear that they did not die of natural causes – has given rise to speculation that they may have found out about these secret agreements. The cause of their deaths has never been fully explained.
The remaining commissioners and the Scottish parliament were under the impression that they had conferred only the crown matrimonial on François, but whatever was actually believed, the future appeared to indicate that Scotland would be governed by Mary and François from France. On 11 April 1558 Mary and François were officially betrothed in the Great Hall of the Louvre Palace in Paris, this event being followed by a lavish ball. The actual ceremony and more celebrations would take place on 24 April 1558.