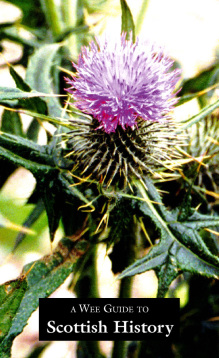 Robert II came to the throne when already 55 years of age, although as Guardian of the Realm, he had been involved in defending the country against the English. He became increasingly infirm, and control of the kingdom passed to his eldest son, John, Earl of Carrick; and then to his next son, Robert, later Duke of Albany. Robert II was married to Elizabeth Mure, and then to Euphemia Ross, by whom he had many children.

Fighting between England and Scotland continued. The English, under the Percy Earl of Northumberland, raided as far as Edinburgh in 1383, and again in 1385, although it was meant to be a time of truce.

The Scots got their revenge at the Battle of Otterburn in 1388, where they defeated a force led by Percy and captured him, although the Earl of Douglas, leader of the Scottish army, was killed at the battle.

In 1390 Robert II died at Dundonald Castle and was succeeded by his son, John. However, the name John was not seen as a suitable name for a king of Scots, and he was crowned as Robert III.

Robert III had been left lame by a kick from a horse, and did not have the ruthlessness or vigour to rule well. He said of himself that his epitaph should be Here lies the worst of kings and the most miserable of men. During this time, the power of the MacDonald Lord of the Isles increased until they ruled a virtually independent kingdom in the north and west; in the Borders, the Douglas family was supremely powerful.

One brother of Robert III, Alexander Stewart, the Wolf of Badenoch, made himself Earl of Buchan by forcing the Countess of Buchan to marry him. When he was excommunicated by the Bishop of Moray, he sacked the town of Forres, and torched the town and cathedral of Elgin.

The kingdom was increasingly ruled by another brother, Robert, Duke of Albany. Robert III had a son, David, Duke of Rothesay, by his wife Anabella Drummond, as well as many other children. Uncle and nephew, Albany and David, Duke of Rothesay, competed with each other for power, until Albany had David imprisoned, and probably starved to death, at Falkland Palace in 1402.

The Scots raided deep into England the same year – but on their return, laden with plunder, were heavily defeated by the English, led by the Percys, at Homildon Hill, near Wooler, in Northumberland. The Earl of Douglas, leader of the army, was among those captured.

Partly to remove him from any possible harm from his uncle Albany, the young James, son of Robert III, and now heir to the throne, was sent to France. On his journey, however, he was captured by the English and imprisoned by Henry IV.

Robert III died at Rothesay Castle in 1406, a few days after hearing of his son’s fate, and – there being none to oppose him, with James, the heir to the throne, imprisoned in the Tower of London – Albany ruled the kingdom. He may even have tipped off the English that James was being sent to France.

Teaching began at St Andrews in this year, and was formalised in 1413.

In pursuing his claim to the Earldom of Ross, Donald MacDonald, Lord of the Isles, descendant of Somerled, invaded the mainland of Scotland and marched on Aberdeen. He was met by an army, led by Alexander Stewart, illegitimate son of the Wolf of Badenoch, who had made himself Earl of Mar by forcing the Countess of Mar to marry him – like father, like son. The MacDonald forces were defeated and retreated, although with such slaughter on both sides the battle is known as the Red Harlaw.

James I was released from imprisonment in England, after a ransom was paid by the Scots. During his captivity, he was married to Joan Beaufort, and they had a son James, born in 1430, as well as other children.

Although Albany was already dead, James had Murdoch, his son, executed. However, James did not rule well, making himself unpopular by his uneven enforcement of order and high-handedness towards the nobles. In 1427 he imprisoned Donald, Lord of the Isles, and many other Highland chiefs, and had some of them executed – stinging Donald into ravaging Inverness and Lochaber.

James was murdered at Perth in 1437 by a party of disgruntled nobles. Joan, his wife, had the murderers captured and cruelly tortured before execution. James’s heart was taken on a pilgrimage to the East, and later brought back from Rhodes by a Knight of St John.

1437-60 James II & the Destruction of the Black Douglases

James II, son of James I, came to the throne when he was only six. James had a red birth-mark covering half of his face, which gave him his nickname James of the Fiery Face.

The families of Crichton and Livingston competed for power during his minority. They united briefly to murder the 6th Earl of Douglas, at the Black Dinner at Edinburgh Castle in 1440, as they both feared the power of the Douglases. Not unreasonably, the Douglases besieged Edinburgh Castle, and sacked Crichton Castle – now a fine ruin – although the 7th Earl of Douglas, James the Gross, may have had a hand in the murder.

James II married Mary of Gueldres in 1449, when he finally assumed power, and they had a son, another James, in 1452. James II encouraged the arts and science, and Glasgow University was founded in 1450.

The Black Douglas family were very powerful in Scotland during his reign, having acquired much land and power through James Douglas, a supporter and friend of Robert the Bruce. The Douglases were allied with the Lindsay Earls of Crawford and the MacDonald Lord of the Isles.

James II, fearing this alliance and detesting their pride, murdered William, 8th Earl of Douglas in Stirling Castle, despite having promised him safe conduct.

James took, and destroyed, many Douglas strongholds, including the castle of Threave, and the Black Douglases were finally defeated and their power destroyed at the Battle of Arkinholm in 1455. James II then attempted to recover Roxburgh Castle and the town of Berwick from the English, but was killed by an exploding cannon at Roxburgh in 1460, at the age of 29. He was buried in Holyrood Abbey.

James III was only eight when he became king, and during his minority the Boyd Earls of Kilmarnock were very powerful, having seized and imprisoned the young king.

James III married Margaret of Denmark in 1469, and so acquired Orkney and Shetland as part of the dowry. They had a son, another James.

James III destroyed the power of the Boyds in retaliation for their earlier behaviour, but made himself very unpopular by acquiring much of the lands and property of the nobility. In 1482 the King’s favourite, Cochrane, and other friends of the king, were hanged by Archibald ‘Bell the Cat’ Douglas, Earl of Angus, from Lauder Bridge in front of the king. In 1482 and 1484 disgruntled nobles, such as the 9th Earl of Douglas, helped the English raid Scotland.

The Scottish nobles eventually decided to replace James with his 15-year-old son, the future James IV. James III raised an army, but was defeated at the Battle of Sauchieburn in 1488, and reputedly murdered after the battle by an assassin disguised as a priest. He was buried in Cambuskenneth Abbey, near Stirling.

The first recorded use of the thistle was in 1470, when it embellished one side of coins minted in Edinburgh.

James IV came to the throne when he was 15, and took control of the kingdom, although he reputedly wore a heavy iron chain for the rest of his life in penance for the death of his father. He ruled well, extending civil and criminal justice.

James signed a treaty of perpetual peace with England at his marriage in 1502 to Margaret Tudor, sister of Henry VIII of England, although the couple do not seem to have liked each other. Enough, however, to have a son, James, born in 1512.

He encouraged science and literature, and in 1507 printing was introduced to Scotland. He also remodelled the palaces at Linlithgow, Falkland and Holyrood; and he had the Great Michael, a huge warship, built at Newhaven, near Edinburgh. Aberdeen University was founded, and whisky was drunk in the court by the end of his reign.

However, the English and French went to war, and in 1513, in support of France, James IV invaded England, although a peace had already been signed. At the Battle of Flodden, in Northumberland, despite holding a strong position, the Scottish army was disastrously defeated. James IV was slain, as were many Scottish nobles, lords, churchmen and soldiers, the worst defeat a Scottish army was ever to suffer.

James V was only one year old when he came to the throne. Margaret Tudor, widow of James IV, married the Douglas Earl of Angus, and the young king was kept a prisoner by Angus between 1526–8. Angus supported the English, but James wanted a French marriage, and eventually married Mary of Guise, by whom he had a daughter, Mary, in 1542 – after his first wife, Madeleine of France, had died. James also patronised the arts, and remodelled Stirling Castle. He, too, hated the Douglas family with a passion until he died – even pursuing his vendetta to Janet Douglas, Lady Glamis, whom he had burnt to death for witchcraft in 1537.

James made himself unpopular by his acquisitiveness from wealthy subjects and his reliance on disliked favourites. He enforced rule of law on the Border by dealing harshly with reivers such as the Armstrongs, further alienating many families. He decided to invade England in 1542, but his army was divided by dislike of both James and his general and favourite, Oliver Sinclair. The Scottish army was soundly defeated by the English at the Battle of Solway Moss.

James died at Falkland Palace shortly after the battle, hearing of the birth of his daughter by Mary of Guise, at Linlithgow. He reportedly said on his death bed It cam wi’ a lass and it’ll gang wi’ a lass, meaning that the Stewarts had gained the throne through Marjorie Bruce and would lose it through his daughter, Mary, later Queen of Scots. He was wrong, however, as Mary married her cousin, Henry Stewart, Lord Darnley, from a close branch of the family.