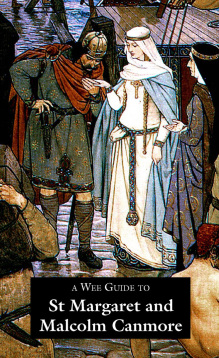 Margaret is one of the best known and loved women from Scottish history, although she died more than 900 years ago. She was renowned during her life for the charity, education and piety, and she was canonised and made a saint in 1259, the only Scottish medieval saint still recognised by the Catholic church.

Margaret was married to Malcolm Canmore, King of Scots, and they had six sons and two daughters. Malcolm was one of the most successful of Scottish kings of his age, recovering his kingdom from Macbeth, then defending it against William the Conquere and the Normans, and founding a dynasty of notable kings that lasted for 200 years.

This Wee Guide covers their remarkable lives and times, and lists many places associated with them, such as Margaret’s shrine and cave at Dunfermline and her chapel at Edinburgh Castle.

The Making of a Saint

Some Other Places of Interest

Printed by Bell and Bain in Glasgow, Scotland